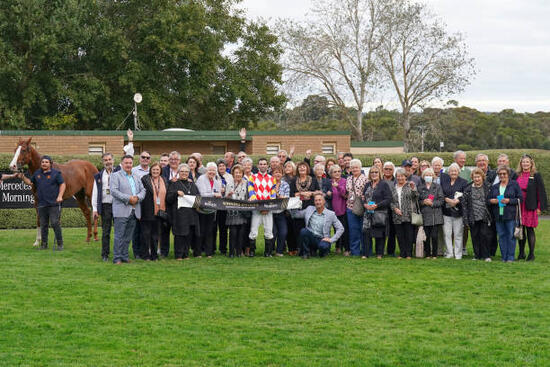 Exciting times continue for the Social Syndicates group as up-and-coming filly Dazzling Lucy wins again at her hometrack of Mornington. The flashy filly provided connections with a maiden success at the same track at the end of her last preparation, and she’s picked up just where she left off with a first-up win on Monday.

It was a huge turnout, as usual, from the massive ownership group who cheered home their filly who has now won two races from her three starts.

Trainer Tony Noonan was thrilled to see the great representation be rewarded once again.

“It’s very exciting the run they are going on at the moment,” Noonan said. “It’s good karma because they’re good people and definitely in it for the right reasons. Hopefully it can continue.”

The daughter of Star Witness, out of handy mare Sky Dazzle who was also trained by Noonan six years ago, couldn’t have been much more impressive on resumption, showing a lovely turn of foot to win by two-and-a-half lengths.

Noonan is confident there’s exciting times still to come from the immature filly who may head to town for her next start.

“She’s still learning her craft and she’s quite a big filly who was broken in late so there’s still good improvement there – she’s an exciting filly,” he said.

“She has the right temperament and hopefully that should take her a long way. She’s definitely heading in the right direction.”

The Social Syndicates program continues to be a great success for the stable allowing more owners to get involved at an affordable price.

For those wanting to connect and share the social and entertainment interest through the program, get in touch with our Social Syndicates Manager John Mathieson at john@tonynoonanracing.com.au.

Our syndicate members currently consist mainly of groups from retirement communities, sporting clubs and workplaces, but anyone is more than welcome to come along for the ride!