The Princess pounces to pick off maiden victory 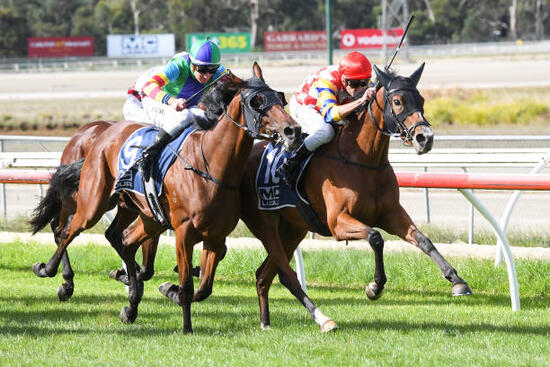 Quirky mare Princess Violet provided a satisfying maiden victory at Kilmore on Thursday 7 April and continued the hot run of form the stable has been in over the last month.

The promising four-year-old stayer has taken time and patience to calm her nerves and get the best out of her on raceday. It all came together at her ninth start as she dug deep to fight back and hold off the challenge of You Betcha Woo, who headed the mare at the top of the straight, before saluting by a long neck.

The victory brought up the stables fifth winner (from nine starters) over the last two weeks.

Trainer Tony Noonan was over the moon to see the staff’s hard work put in behind the scenes pay off on raceday.

“It’s very pleasing because she’s an anxious mare and the staff have put in plenty of hours and patience to get her right,” Noonan said.

“Her pedigree suggests she’d be a hot and reactive filly and it’s only time that can help improve her. She’s been well handled, and we’ve been nice and quiet with her so she can gain some confidence and hopefully can continue to build on that.”

The homebred mare from Illowra Stud over-raced two starts back when stepping out to the 2100m for the first time but with the support of some great clients, the plan to bring her back to 1600m paid dividends.

“We went back to the drawing board after that run and had the support of owners Nigel and Meredith Berry. That’s what made the victory so much more satisfying,” Noonan said. “They’re great breeders and we get a tremendous thrill training a winner for them.”

Noonan pointed out the work put in at the stables by apprentice Dakotah Keane to improve the tricky mare.

“She’s done a lot of work with the mare, and while she couldn’t be there on the day because of apprentice school, she was very excited with the outcome, and rightly so,” he said. “She’s doing a terrific job with her.”